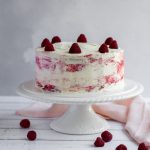 Modern and elegant, this White Chocolate Raspberry Ripple Cake will make your guests ooh and ahh when you place it on the table. Encased inside the velvety white chocolate buttercream are two layers of light, white vanilla sponge swirled with homemade raspberry puree, sandwiching a layer of sharp, fresh raspberries.

Both the white chocolate heritage frosting and raspberry puree can be made up to 3 days in advance. Bring to room temperature before using.